Why Should You Hire A Professional For Chimney Cleaning Services In Canton, GA?

If you want to keep your chimney in the best shape possible and need assurance that it continues to perform as it should, it is crucial to get it cleaned at least once a year in Cherokee County? You should always employ a professional business-like Smoke Alert Home Fire Safety for chimney cleaning services rather than attempting to do it yourself.

Any homeowner would benefit from having a fireplace since they are aesthetically stunning and mentally soothing. However, if you use it frequently or after a lengthy period of inactivity, it's crucial to have your chimney inspected and cleaned by a professional in Canton, GA. Here are three justifications:

Creosote accumulates in the chimney due to wood burning in your fireplace. When cleaning the chimney, all the creosote must be removed. This reduces the likelihood that you'll inhale it and damage your lungs.

It also ensures that the smoke can leave your chimney effectively. The experts at Smoke Alert Home Fire Safety are trained to use the right equipment and methods to efficiently remove creosote or do a chimney flue cleaning from your dirty chimney in Cherokee County.

Does the creosote build up when woods burn in your fireplace? Most creosote may be eliminated while doing routine chimney cleaning and maintenance in Canton, GA. This diminishes the possibility that you'll breathe it in and irritate your lungs.

Additionally, when professionals carefully clean your chimney and resolve all the issues, it guarantees that the smoke may exit your chimney effectively in the chimney’s smoke chambers.

You can possibly harm yourself by attempting to clean your chimney. Not only climbing on your roof is risky owing to the height involved, but it can be risky because you'll be working with heavy equipment and thick soot.

Chimney sweeps at Smoke Alert Home Fire Safety have extensive training and experience cleaning chimneys in Cherokee County. Our specialists have all the necessary gears and know-how to clean your chimney without affecting anyone's safety.

Not everything is meant to be done yourself. In today's digital age, everyone seems to be proficient at DIYs. They want to take up tasks having complicated repairs, restorations, and projects without skills or expertise. This gives an impression that you are making financial savings.

Although the chimneys are hazardous and present in hard-to-reach places, cleaning your fireplace and chimney is different from cleaning your garage!

It's simple to think that viewing a video will teach you all you need to know, but the truth is that getting the job done requires years of training, a lot of safety equipment, and the appropriate professional tools and materials.

Here are some reasons why you should never clean your chimney yourself and should always contact specialists in Cherokee County.

1) Professionals Are Trained In Proper Methodology

You cannot learn how to sweep a chimney by reading articles or watching videos. Professionals at Smoke Alert Home Fire Safety, have extensive training and credentials, developed their chimney sweeping methods and procedures, accumulated personal experience, and can clear your chimney of all debris, residue, soot, and other trapped components.

The experts are skilled in using brushes, wipes, and other cleaning techniques to thoroughly process chimney inspection, remove any dangerous creosote buildup, and help with routine chimney cleaning and maintenance. 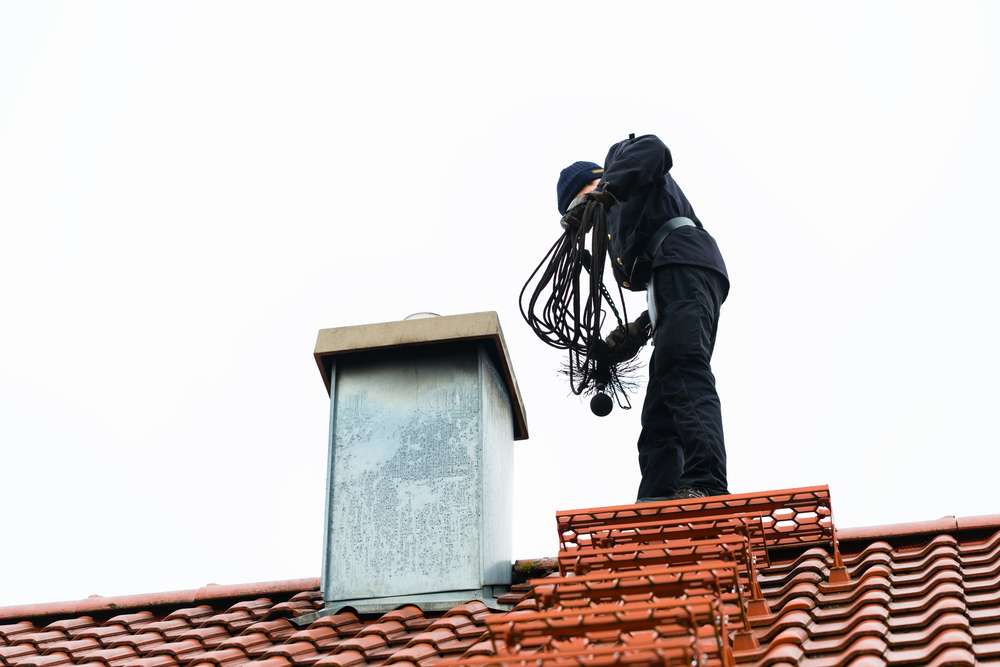 Possessing a certification and a work authorization makes a huge difference. Professional cleaners are insured and they thoroughly understand both theory and practical application. To keep them safe, they have protective gear, including helmets, masks, coveralls, and ladders.

Additionally, they have access to cleaning materials, equipment, and tools that the average person would not be able to purchase. The high cost of the necessary tools and supplies does not justify doing the task yourself.

The chimney will be cleaned thoroughly and without any residue by professionals. This is a massive advantage because inexperienced cleaners and homeowners will probably spend hours cleaning without properly completing the task. Additionally, by doing it yourself, you will waste more time, energy, and effort.

4) Chimney Sweeping Is A Messy Job

It's a significant problem because the chimney cleaning process should be untidy. Furniture, carpet, and other surfaces can be damaged by ash buildup and soot in your dirty chimney that leaks into your house.

Our specialists will make sure the job is done hassle-free. The experts thoroughly cover the area with coverings to stop the ash and soot from entering your home.

Of course, there is less risk of damage when a professional is doing it. They are accustomed to performing physically demanding tasks like this while working at heights.

If you have any questions regarding our processes for chimney cleaning or chimney inspection, contact our experts from Smoke Alert Home Fire Safety to receive appropriate suggestions.

Call us any time on 770-765-7000 to schedule an appointment with the professional to resolve any query in Canton, GA.

Some information about Canton, GA

Located in the foothills of the Blue Ridge Mountains, the site where Canton would be founded lay in the heart of the original Cherokee Nation. During the first 100 years of Georgia’s history, Northwest Georgia was generally considered “Indian Country” and was bypassed by settlers going West. Georgia reached an agreement with the federal government in 1802 shortly after the Revolutionary War to relinquish its Western Territory (it claimed the Pacific Ocean as its western boundary) in exchange for the removal of all Indians within its boundaries. Although other tribes had been removed, the Cherokee remained. Since this was the heartland of the Cherokee Nation, the state and nation were reluctant to disturb them. But following the Georgia Gold Rush in 1829, European-American settlers ignored the Indian problems and began to move into the area north of Carrollton and west of the Chattahoochee River and named it Cherokee.

Many members of the Cherokee Nation moved west in 1829, but the majority stayed until removed by federal troops sent into the area during the summer of 1838. The remaining Cherokee were gathered and held in forts until the removal could be completed. Present-day Cherokee County had the largest and most southerly of these forts, Fort Buffington, which stood 6 miles (10 km) east of Canton. Today nothing stands to identify its timber structure, but the area is marked by a large piece of green Cherokee marble quarried near Holly Springs. By autumn of 1838, the federal troops had accomplished their mission, and the Cherokee at Fort Buffington were marched off to join other groups on the infamous “Trail of Tears,” a lengthy march in worsening winter weather to Indian Territory west of the Mississippi River.

The new settlers chose a site for a permanent county seat and courthouse in 1833, naming it “Etowah”. The name was changed to “Cherokee Courthouse” in 1833. In 1834 it was changed to “Canton” (pronounced cant’n), after the Chinese city of Guangzhou, which was then known in English as Canton (pronounced can tahn). The name was chosen because a group of citizens had dreams of making the Georgia town a center of the silk industry, which was concentrated in China at the time. Though Canton never became a significant silk center, it did become a successful manufacturing community.